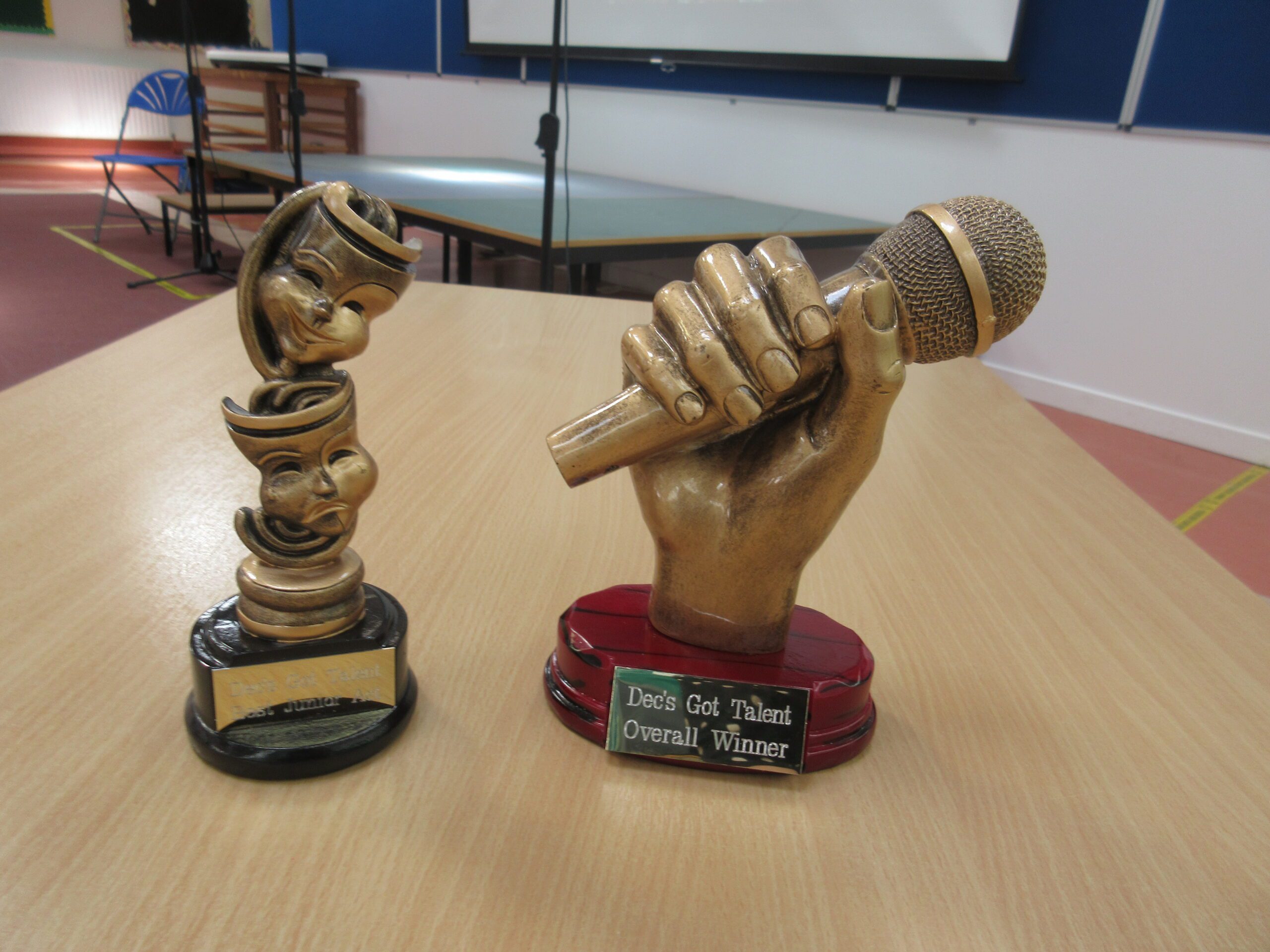 We had a fantastic day in St. Declan’s today as we staged our Dec’s Got Talent. All classes from 2nd to 6th have been preparing for this. Two acts per stream were chosen to go forward to the final along with two wild card acts.  We were joined by Mr Farrell and Mr Farrell our male judges. 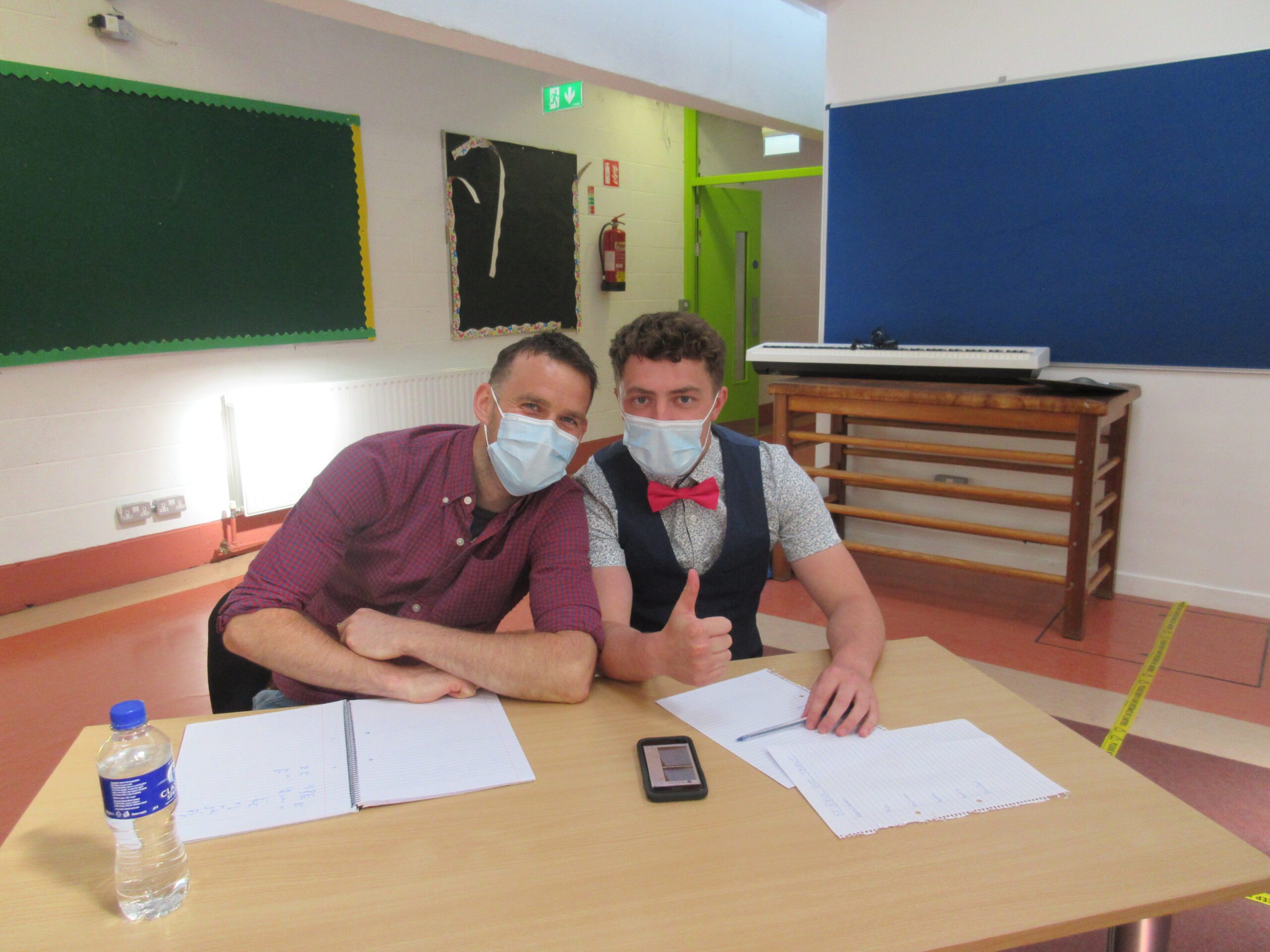 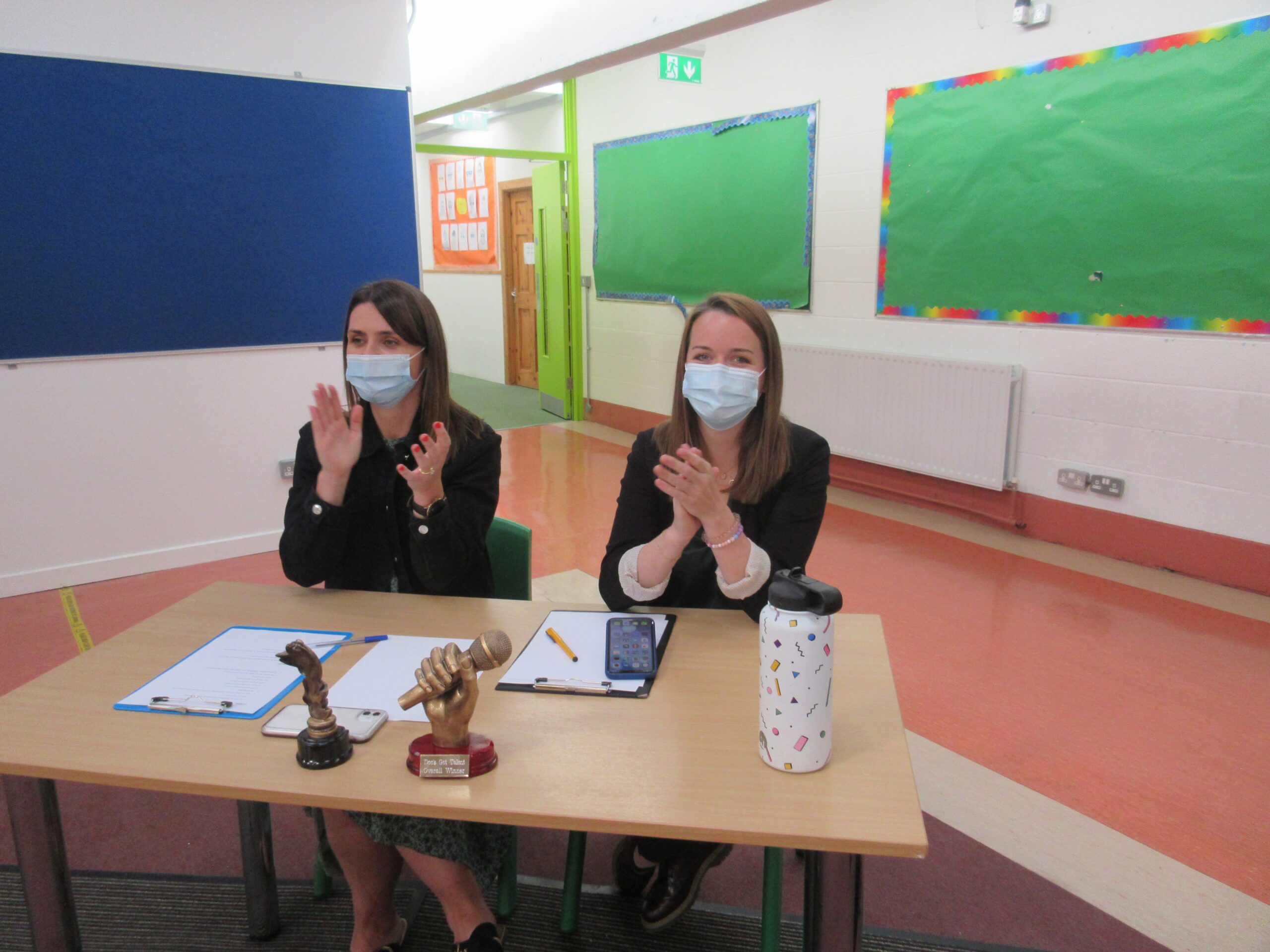 Mr Ryan was looking extremely dapper for the occasion and scrubbed up well in his shirt and bow tie. 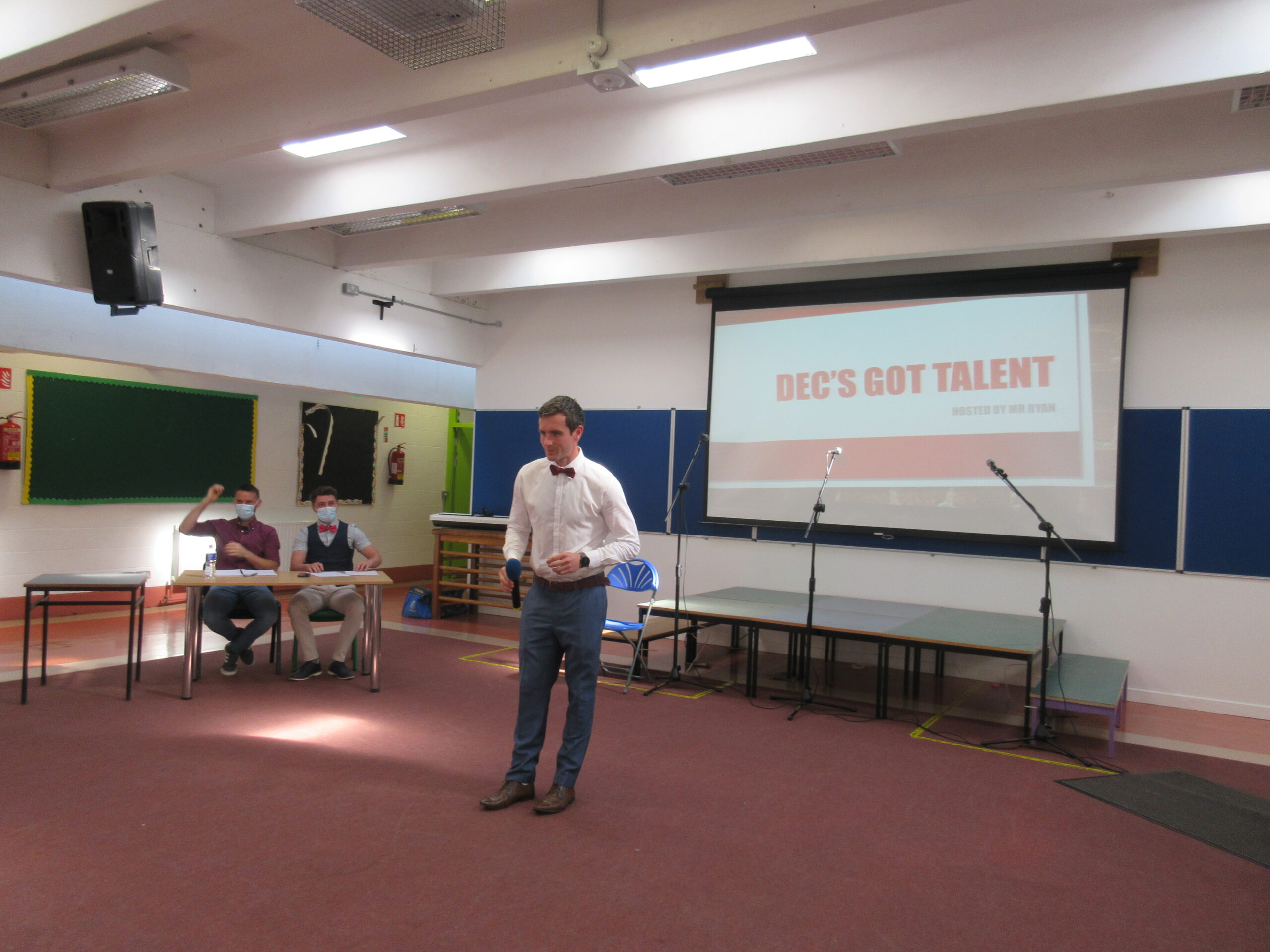 We had Mr Mc Keown on camera and Ms O’Connell on sound production. 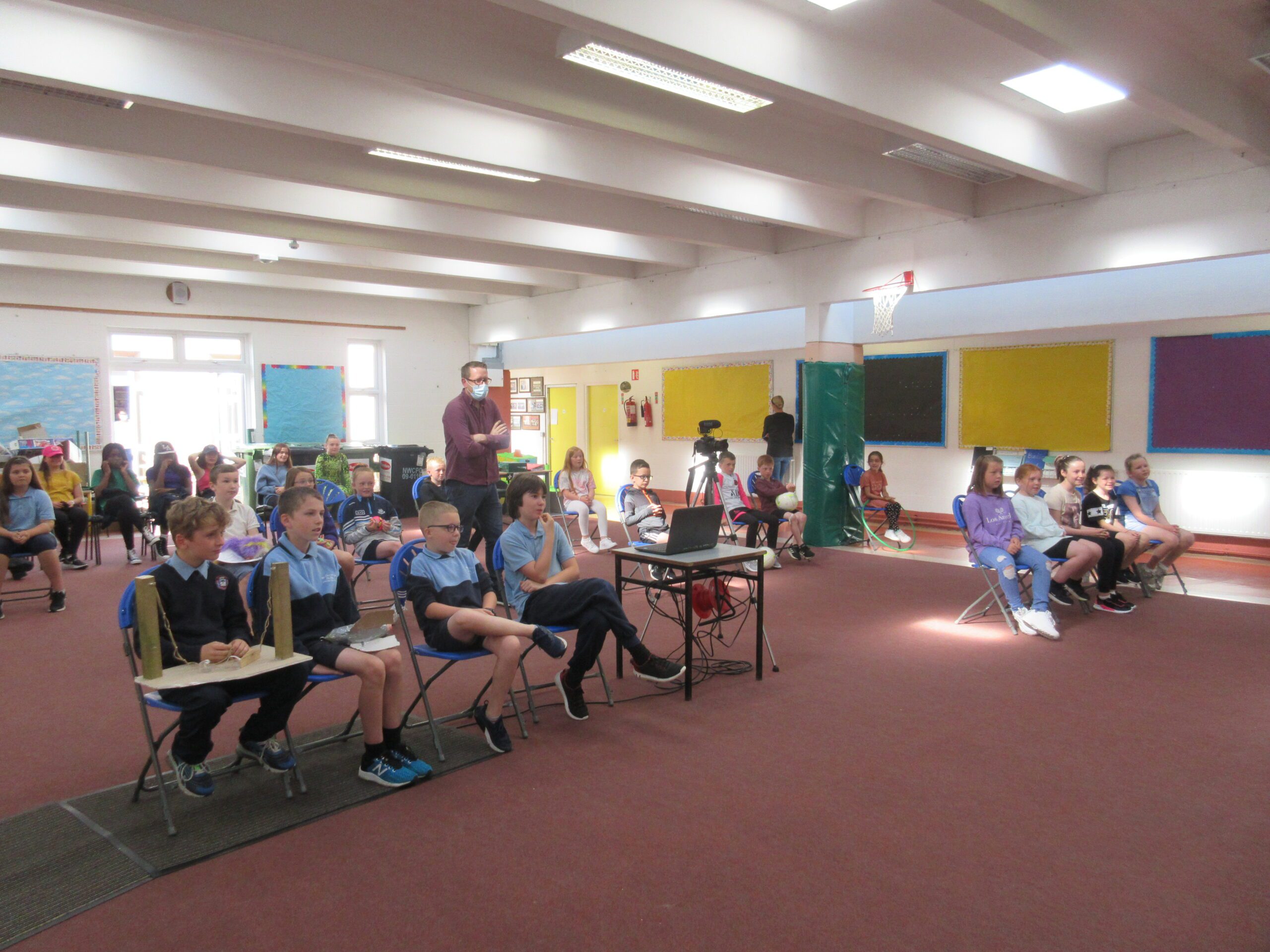 First up from 2nd class we had Liam O’Connell and Cian Doran from Ms Mooney’s class Room 15. They performed an array of ball skills for us. Mr Farrell was very impressed with the boys and can’t wait for them to join the school football team Mr Finnegan a talented football man himself couldn’t believe they were only second class. Well done boys!! 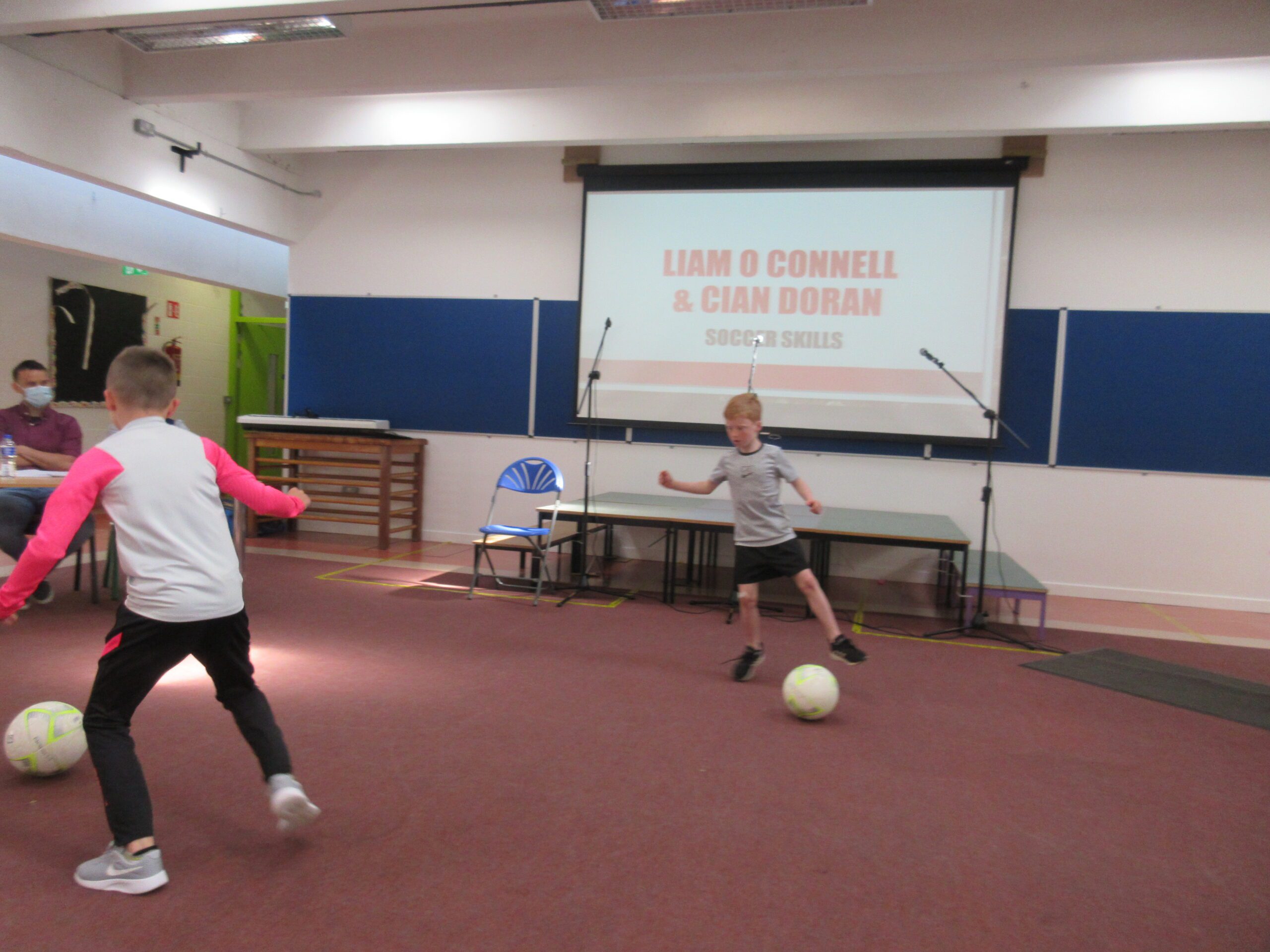 Next we had Ava Mc Mahon also from Ms Mooney’s 2nd class. Ava did a hula hoop routine for us to the song Uptown Funk. Ms Curran loved the song and commended Ava on a great performance. She would love to see her try with two hula hoops if she’s back next year. 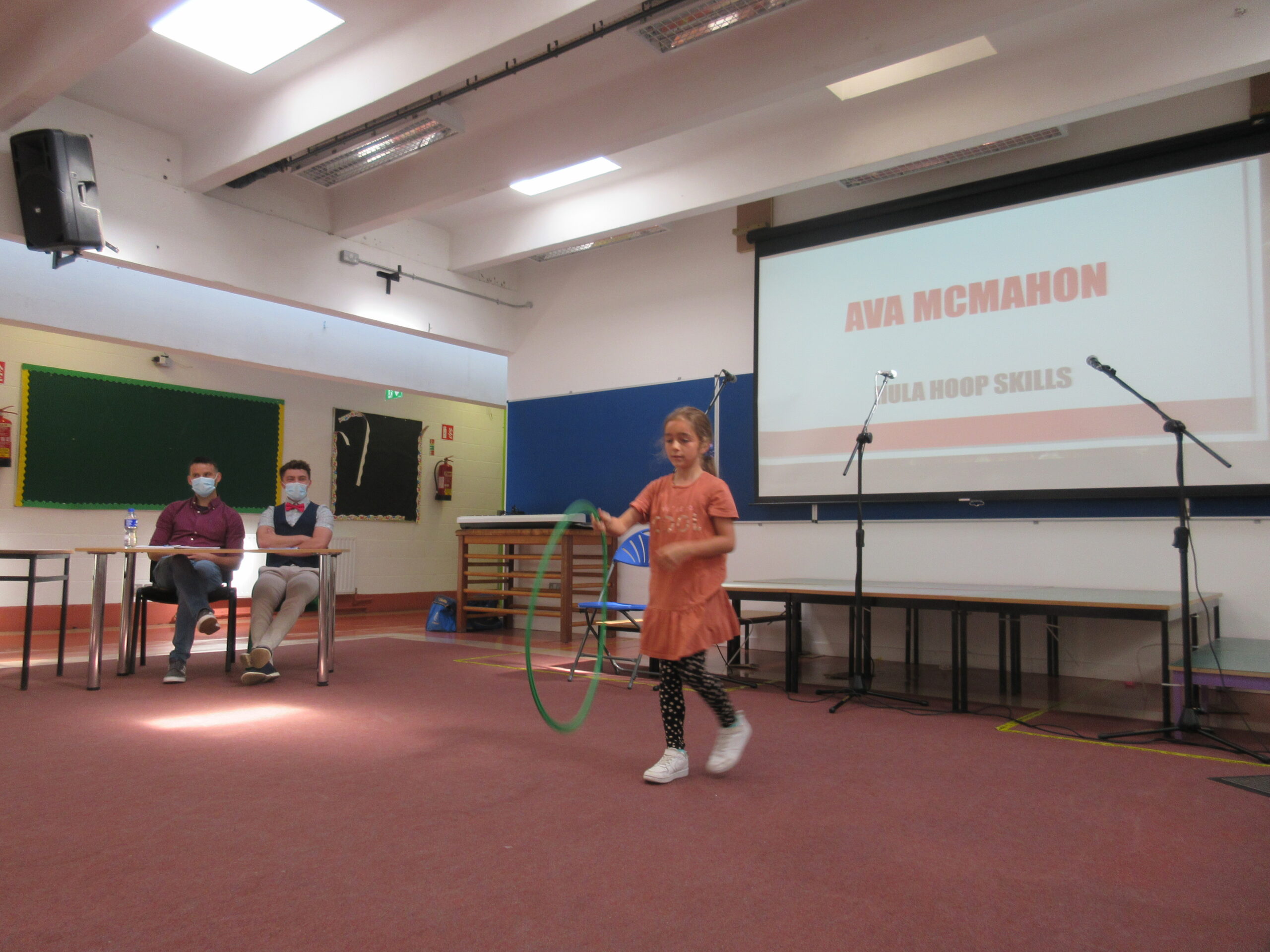 Harrison Bellew from Ms Mc Enroy’s 2nd class blew us all away with his song Fishy On Me. Mr Finnegan told us that this was his favourite song to sing in the shower while Mr Farrell really liked his fish prop and thought it was a FINNTASTIC PERFORMANCE. Ms Jenkinson thought it was a very catchy tune and she enjoyed listening to it. 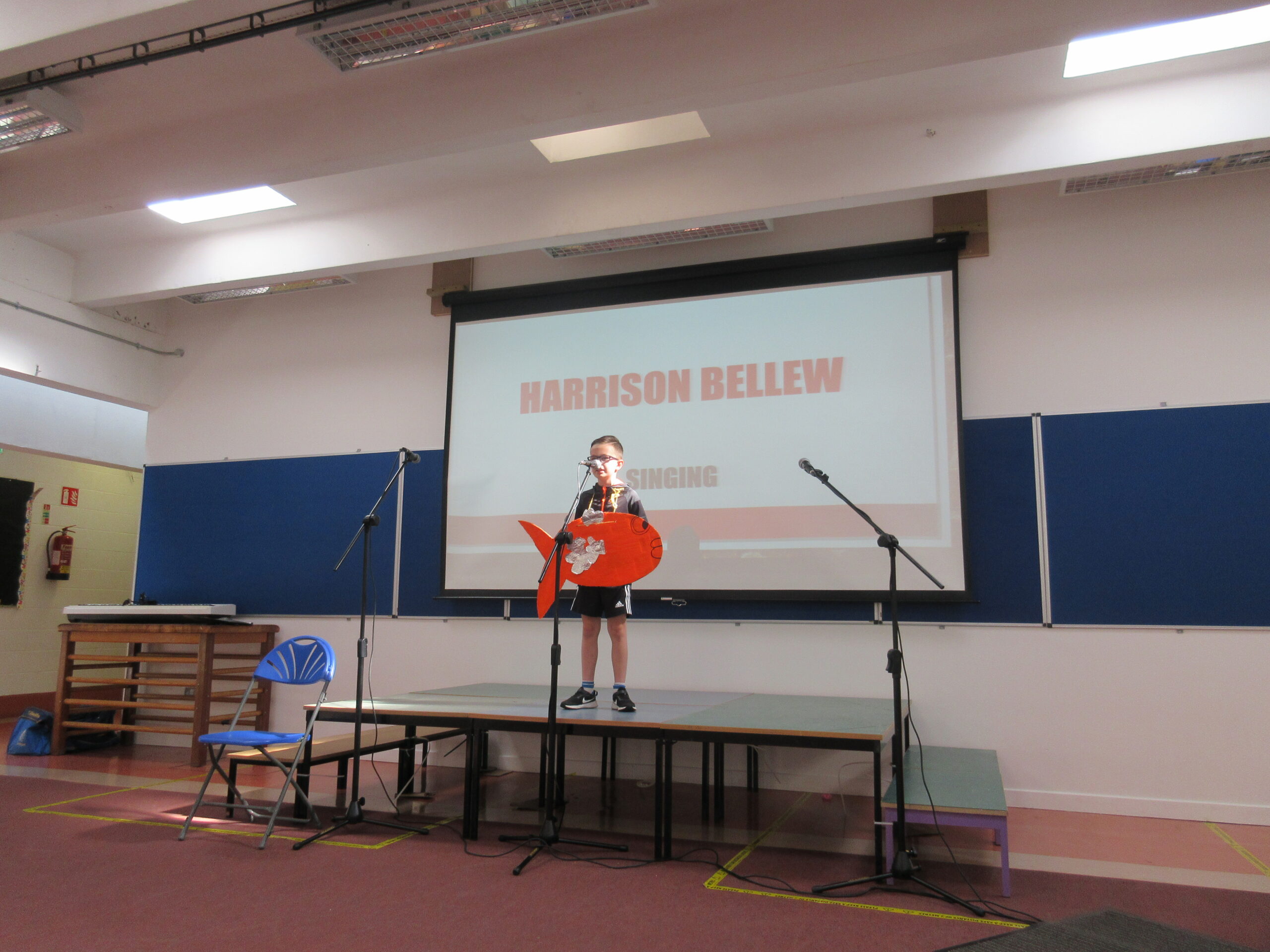 Aaron Nulty from Ms Downes 3rd class Room 9 wowed us with his break dancing. He even managed to show Mr Ryan some moves.  Mr Ryan can’t wait until he gets out on the real dance floor to show off his new moves. Ms Jenkinson said Aaron looked like a pro and even when we had some technical glitches he never waivered. Mr Finnegan had one word for the performance SWAG. He nearly had to call in sick he was so dizzy from looking at Aaron spin and move his feet so fast. 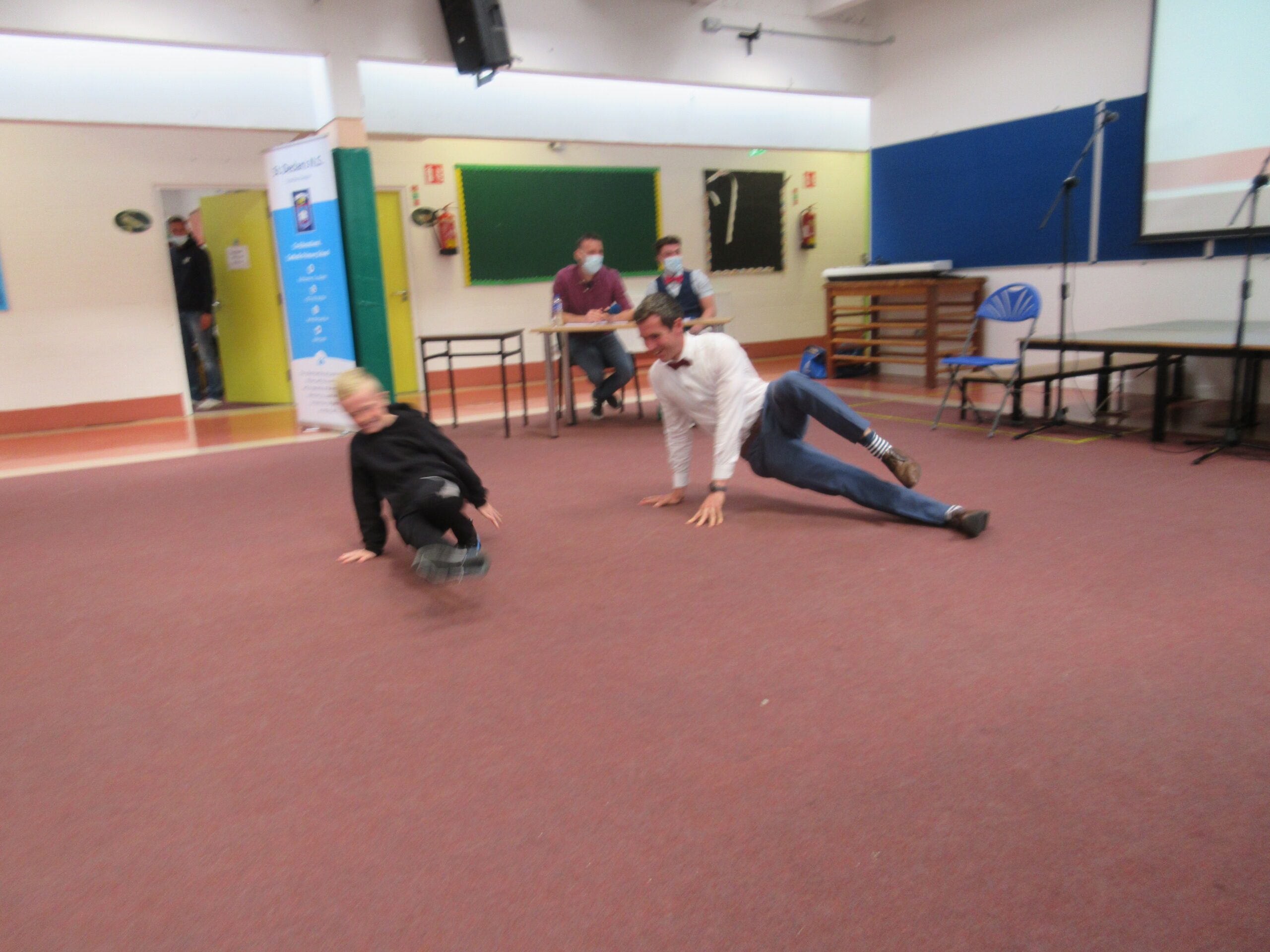 Katie Russell from Ms O’Malley’s 3rd class gave a GIANT performance from Dermot Kennedy. Mr Farrell said she was a breath of fresh air and certainly better than Mr Mc Keown who in his opinion is a mediocre singer in comparison. Ms Curran thought it was a super performance. Great job Katie!! 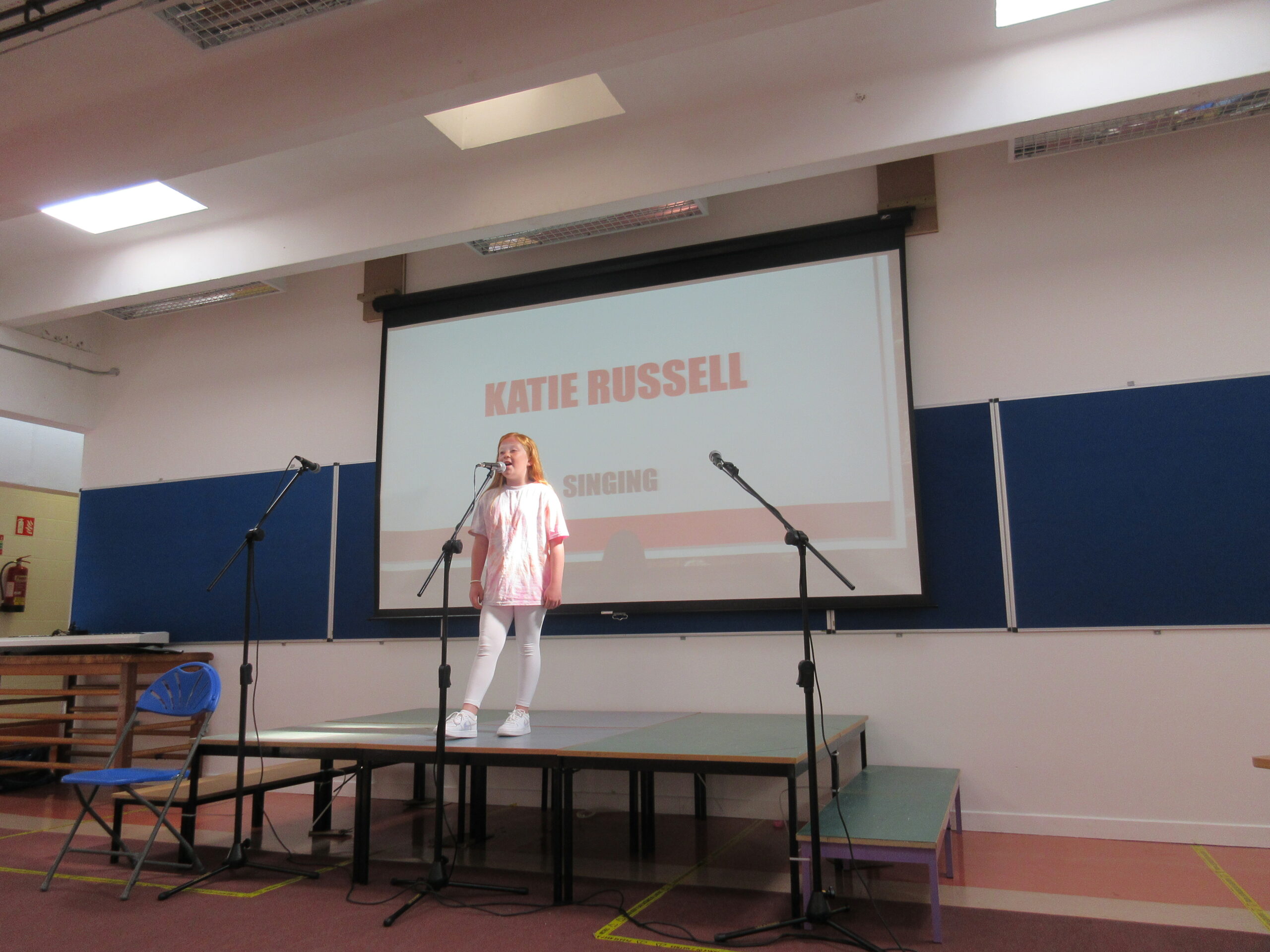 We had Alannah Mc Gowan and Anabel Doyle, who combined call themselves Alannabel from Mc McLoughlin’s 4th class next with a beautiful rendition of Lovely by Billie Eilish. Ms Curran loved their voices and would have loved to hear more of their sweet singing without the background music. Mr Ryan didn’t ask for the opinion of Mr Farrell and Mr Finnegan as he felt they weren’t qualified enough to comment. 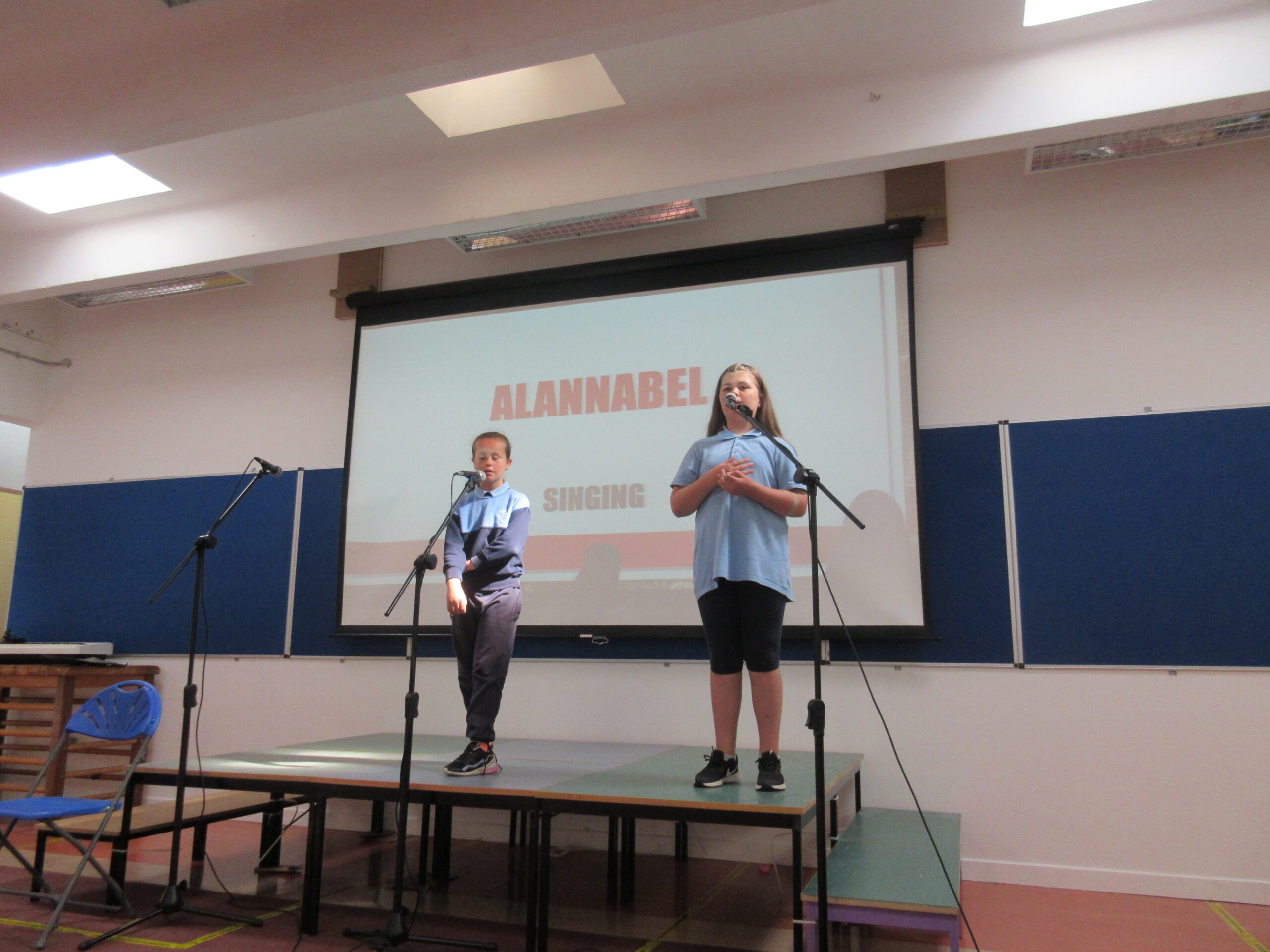 From 4th class Room 5 we had Ethan Hargreaves and his puppet Patrick and he was ably assisted by Emme Doyle and Nicole Delahunty. Ethan is no stranger to the stage as himself and Patrick won the up and coming act on Dec’s Got Talent before. Ms Curran was so happy to see Ethan and Patrick back. Mr Farrell felt there was great chemistry between Ethan and Patrick and Mr Finnegan was impressed by his ventriloquism. 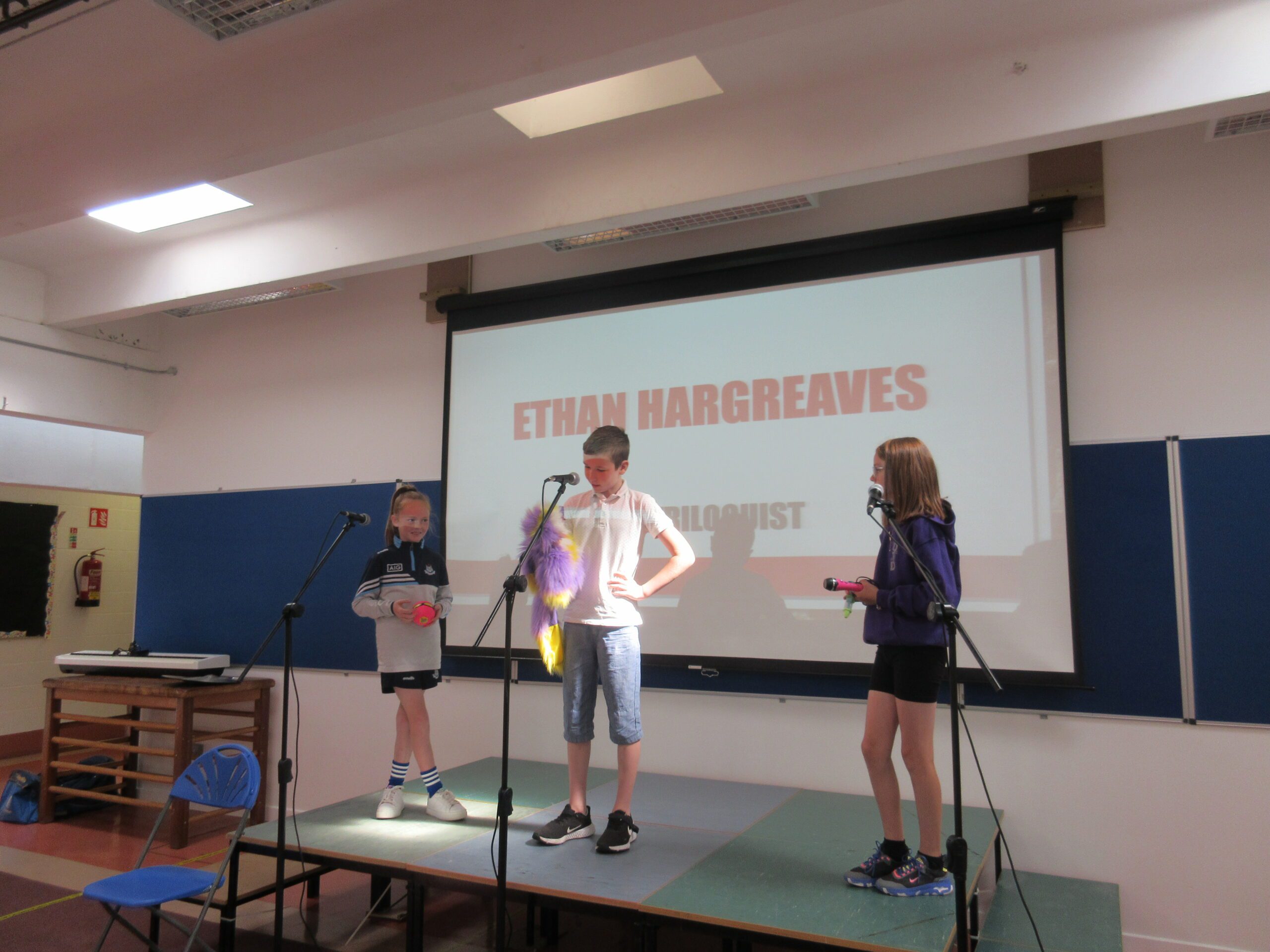 Arian Angustia from Room 7 5th class played some beautiful classical music for us on his keyboard. Ms Curran said it was like being at a live concert again. Mr Farrell didn’t like it, he LOVED it. 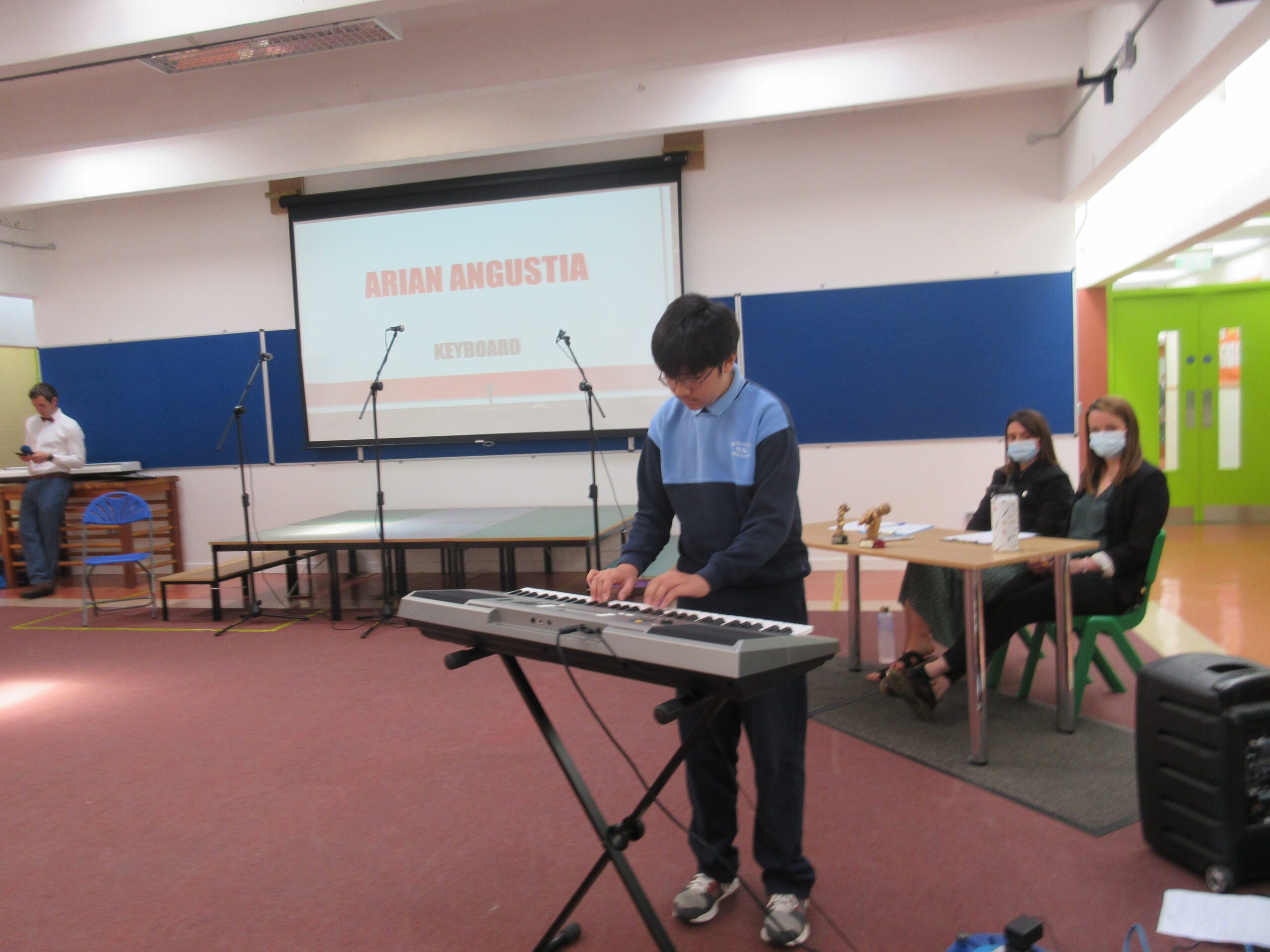 We had a science experiment from Finn Mc Partland Monkfort in Ms Quinlan’s 5th class. Mr Finnegan thought they were the best act of the day, but maybe he is slightly biased. Mr Farrell said it reminded him of looking at Mr Finnegan one morning in the staff carpark trying to park his van. It took numerous attempts to get it right. Ms Jenkinson loved the comedy element of the performance. 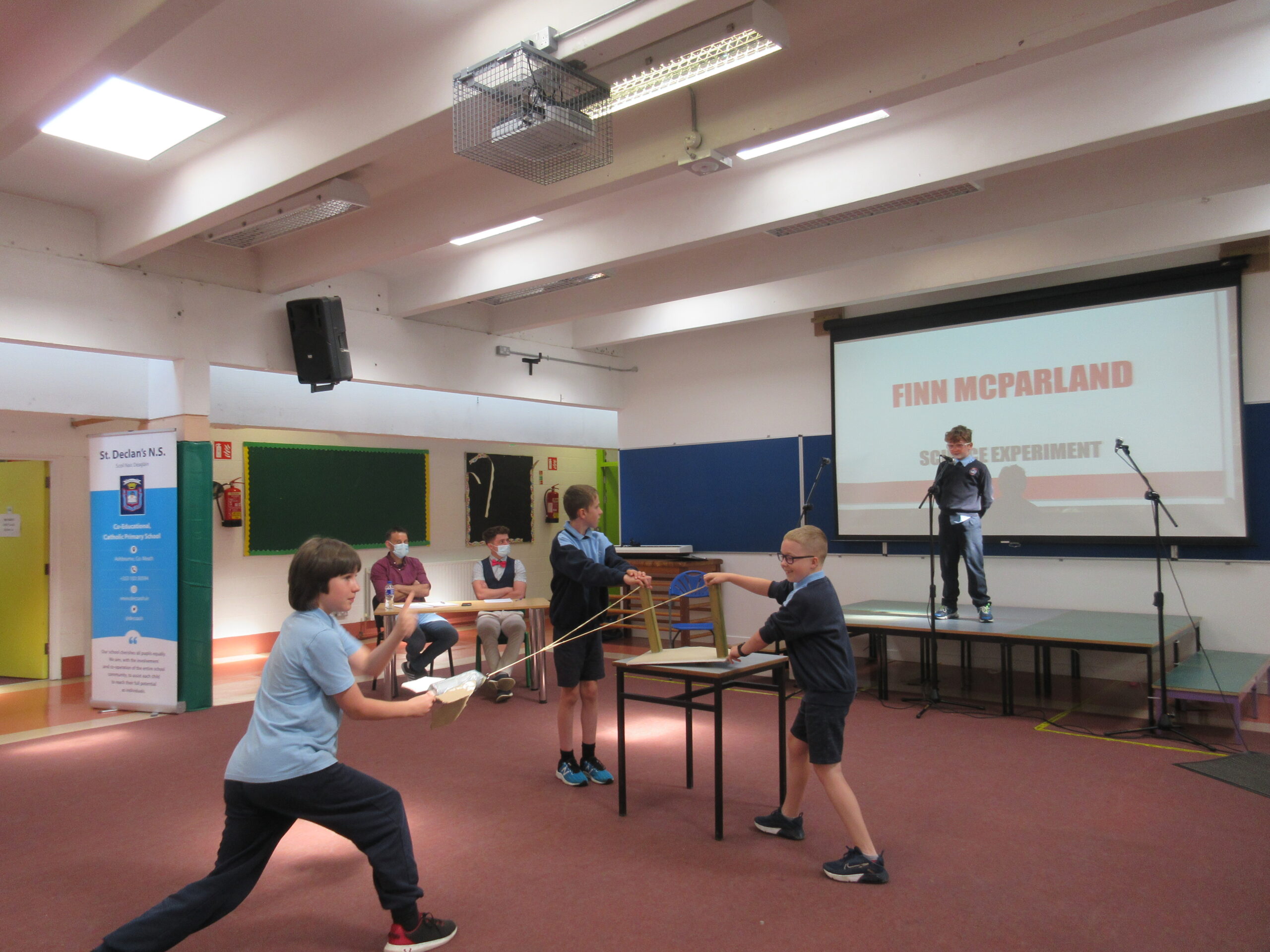 The ladies from Room 2, Ms O’Halloran’s 6th class gave a fabulous performance for us with a serious array of dance moves. Ms Jenkinson loved their moves and the way the worked together as a team. Ms Curran thought they had great style and grace. 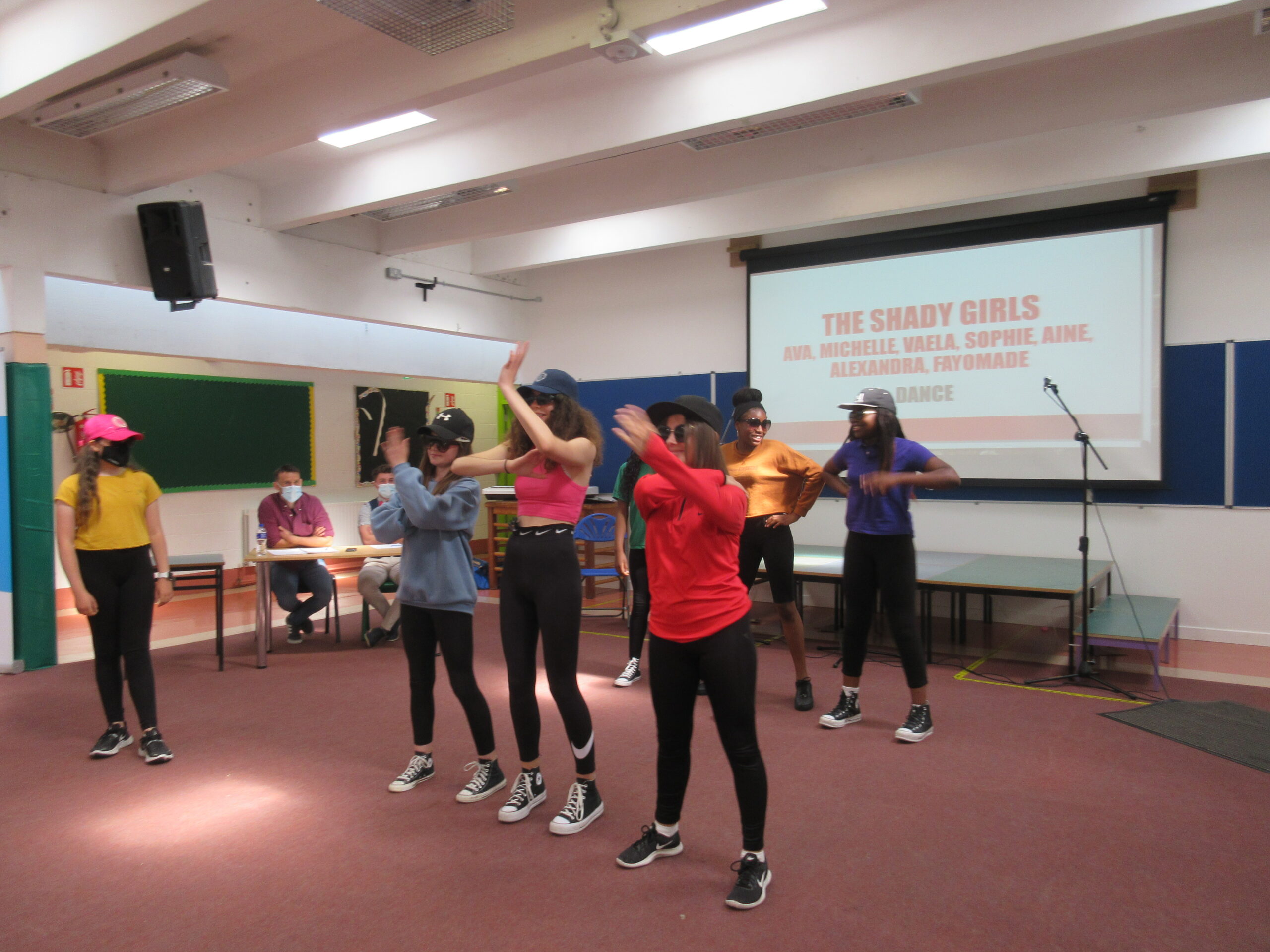 From Room 4 6th class we had Taylor Jade Kelly hit the dance floor. Taylor gave an outstanding performance of contemporary dance. Ms Curran said it was beautiful and she was feeling quite emotional after it. She said she could watch Taylor all day long. Ms Jenkinson said it her favourite act and for her a winning performance. Mr Farrell was only sorry he won’t see Taylor perform it again as she is in 6th class and will be leaving us next week. Mr Finnegan loved her outfit and song choice. All in all it was a yes from the four judges. 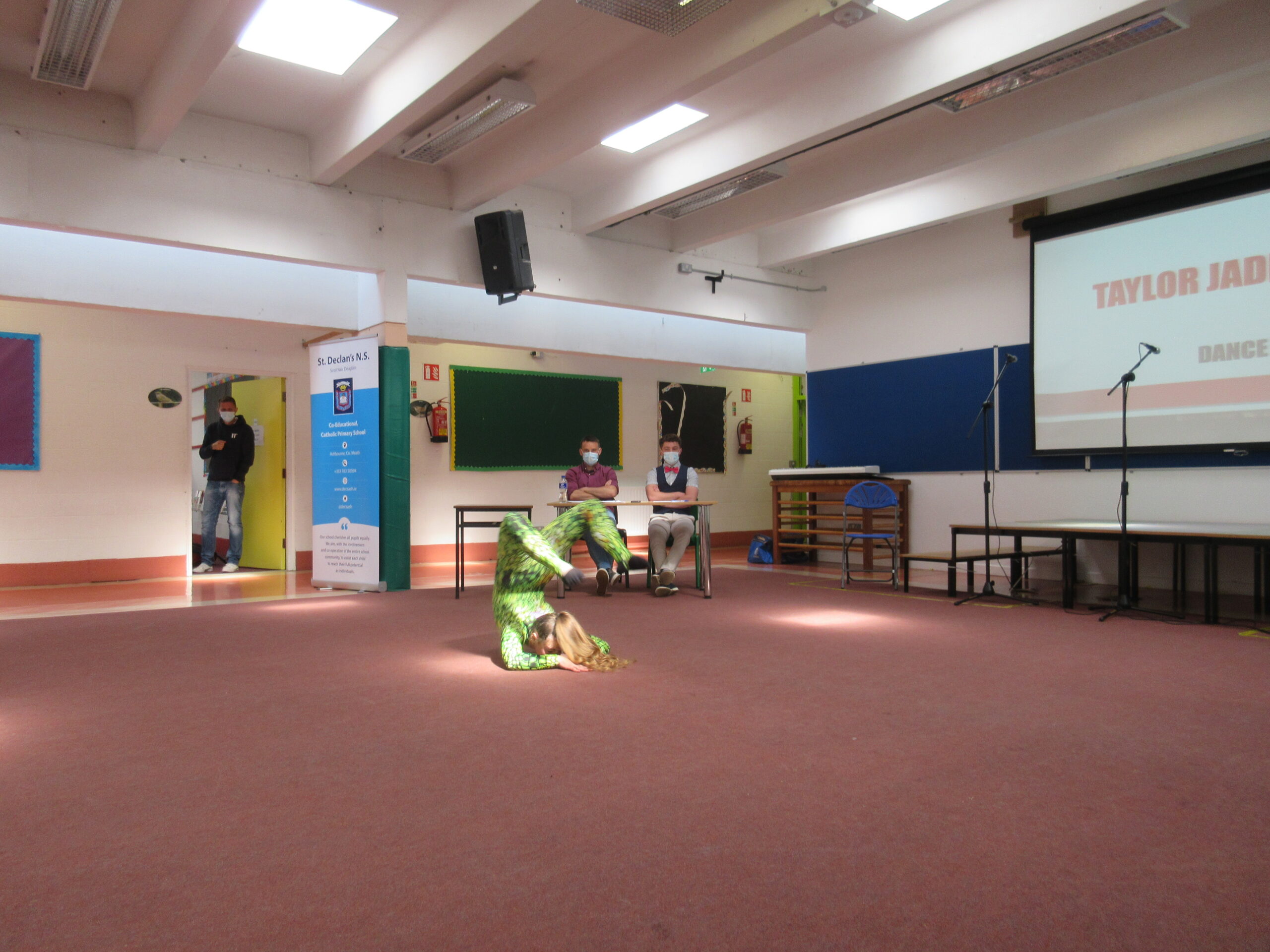 We had our first wild card act next. DREAMS form Room 11 3rd class, Ruby Mouat, Emma Mulligan O’Grady, Eva Donnelly. Marie Antoinette Fitzsimons and Lucy Kelly with their song Million Dreams from the movie The Greatest Showman. Mr Finnegan said it was a great song choice from a great movie. Mr Farrell said if Mr Lydon had one dream it would be to sing as well as the girls in his class. Ms Curran loves that song and said the girls were brilliant. Ms Jenkinson said she loved the way Ruby smiled the whole way through the performance. High praise girls!! 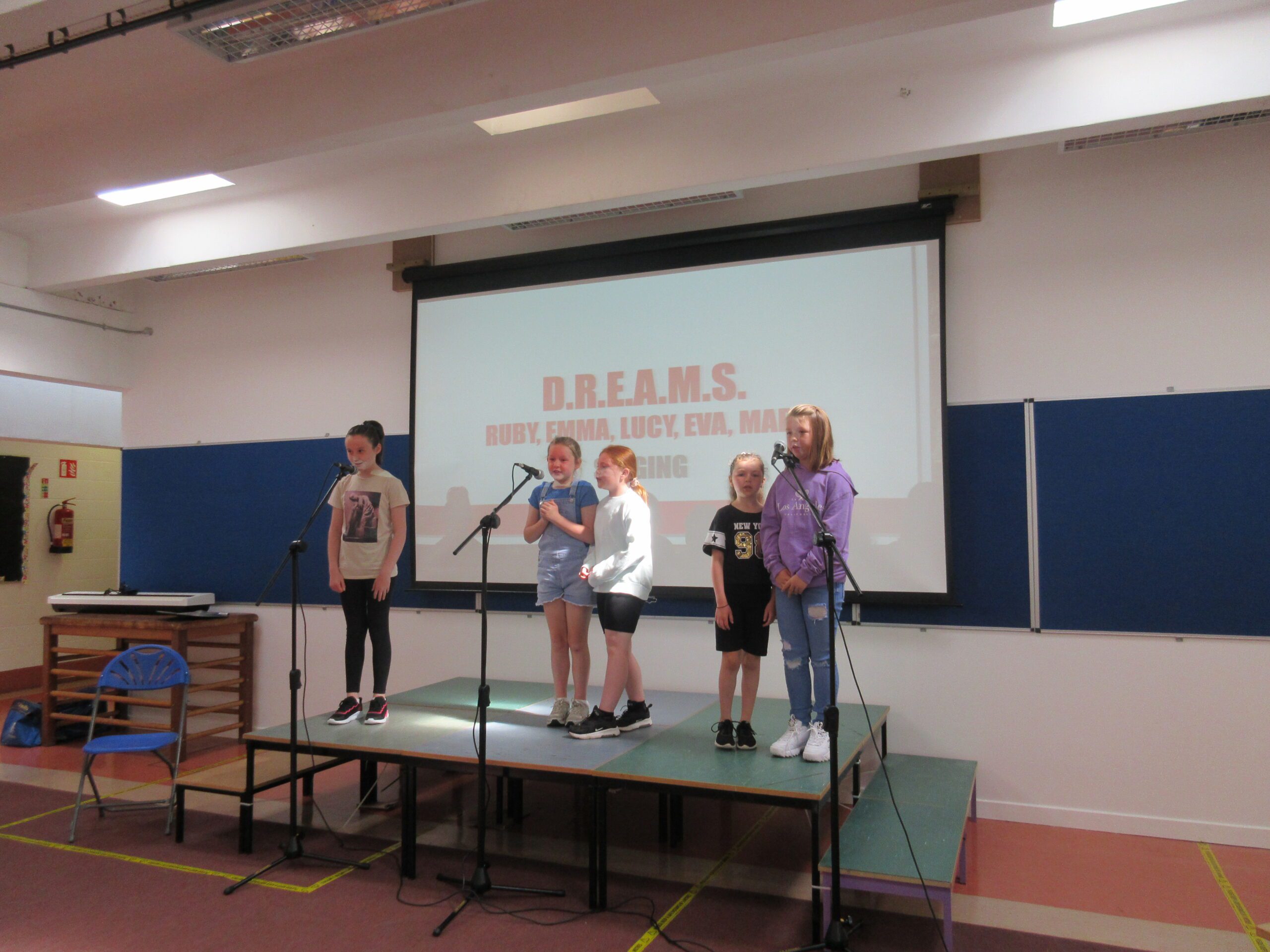 Lat but by no means least we had Logan Moloney from Room 2 6th class with some savage football skills. Mr Finnegan said he made it look so easy. Mr Farrell commended him for getting up on his own to perform as that can be very difficult. He said Logan reminded him of a young version of Mr Melia. 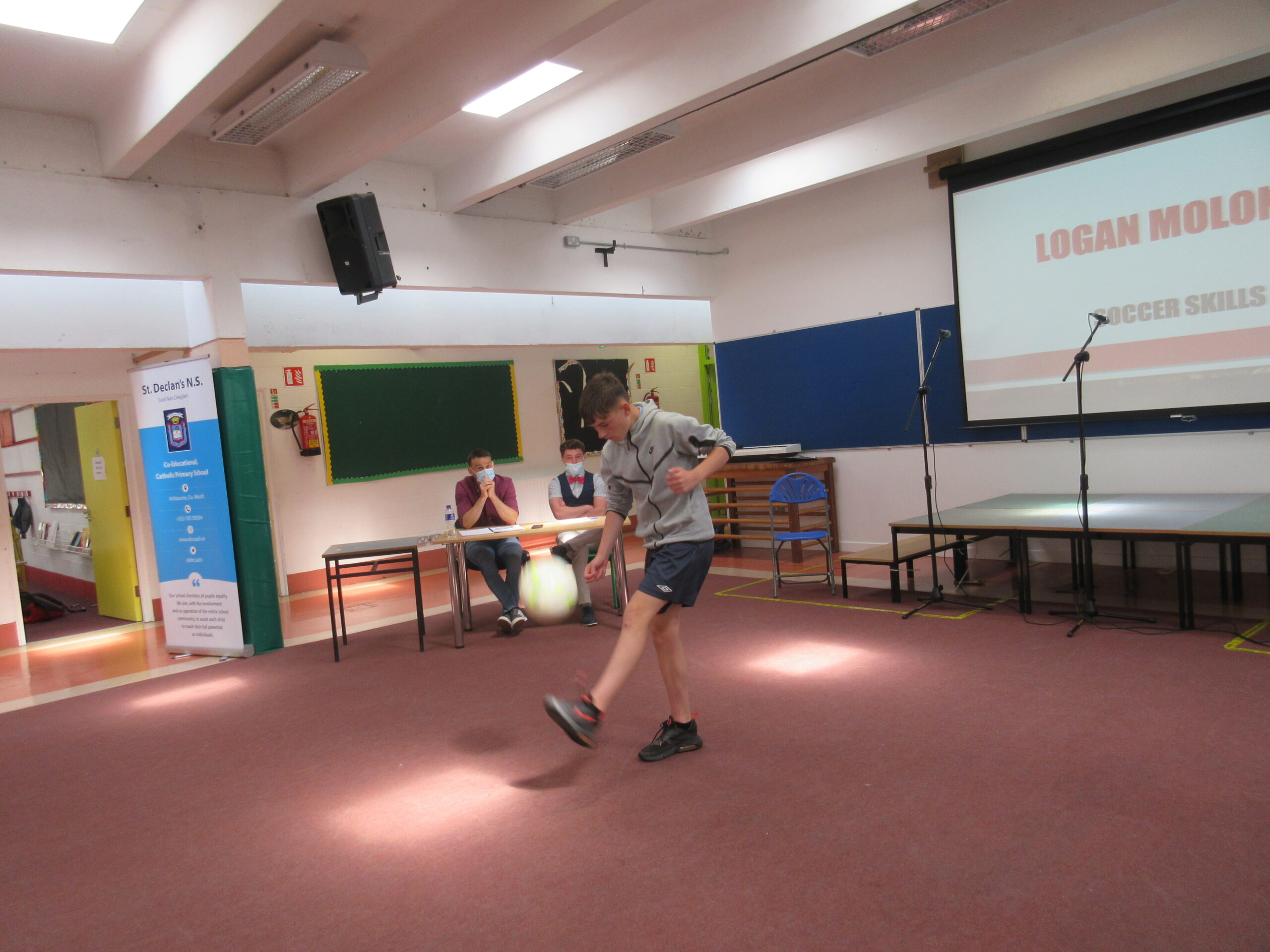 The judges went off stage then to confer and to decide who was going to be crowned Best Up and Coming Act and Overall Winner.

Mr Kearins thanked everyone for the huge effort they went to and for all the children who auditioned for the show. All the children were presented with certificates for participating.

The best up and coming act went to DREAMS from Mr Lydon’s Room 11. The girls were thrilled with the win and it’s only the beginning for them. 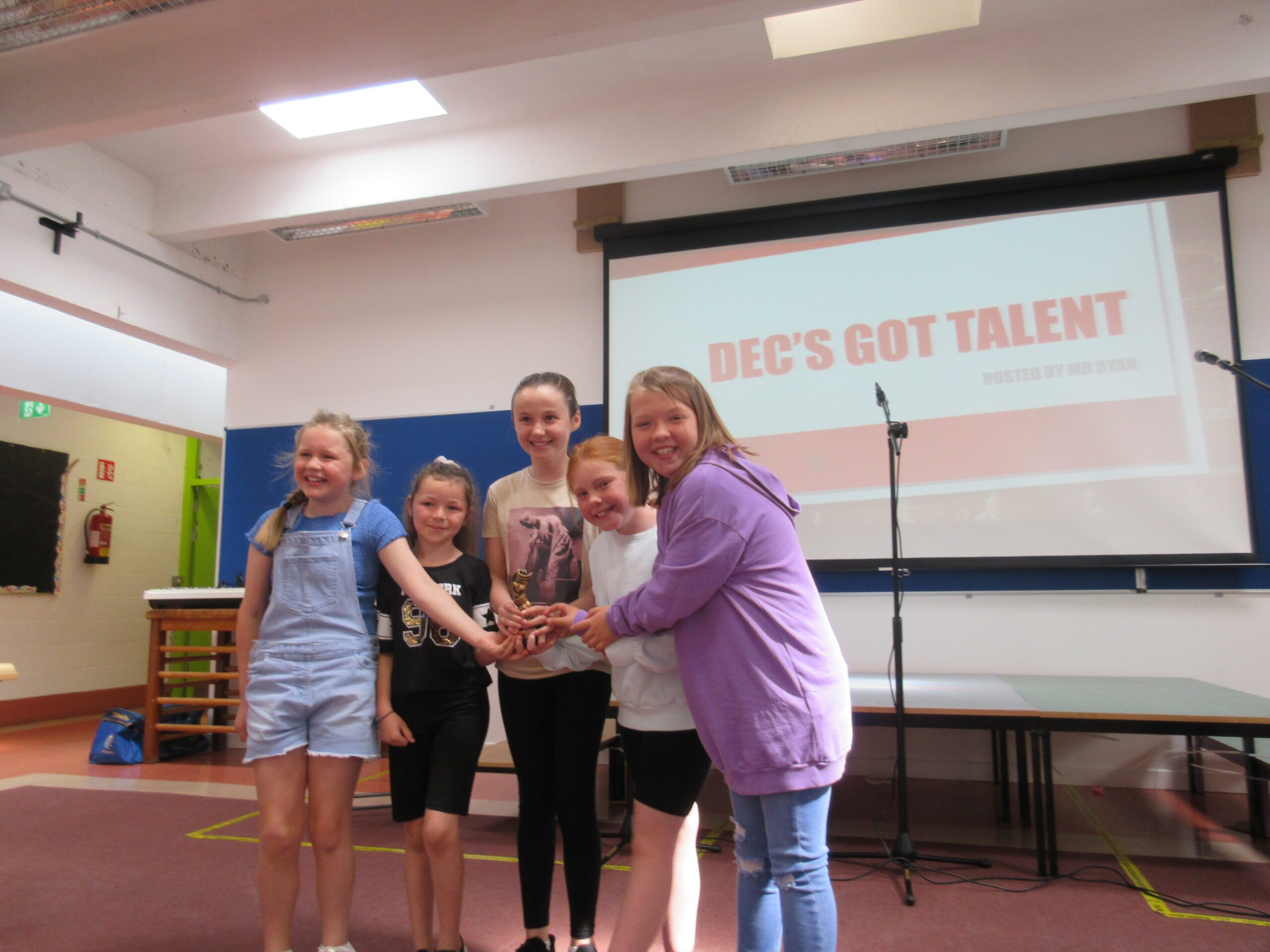 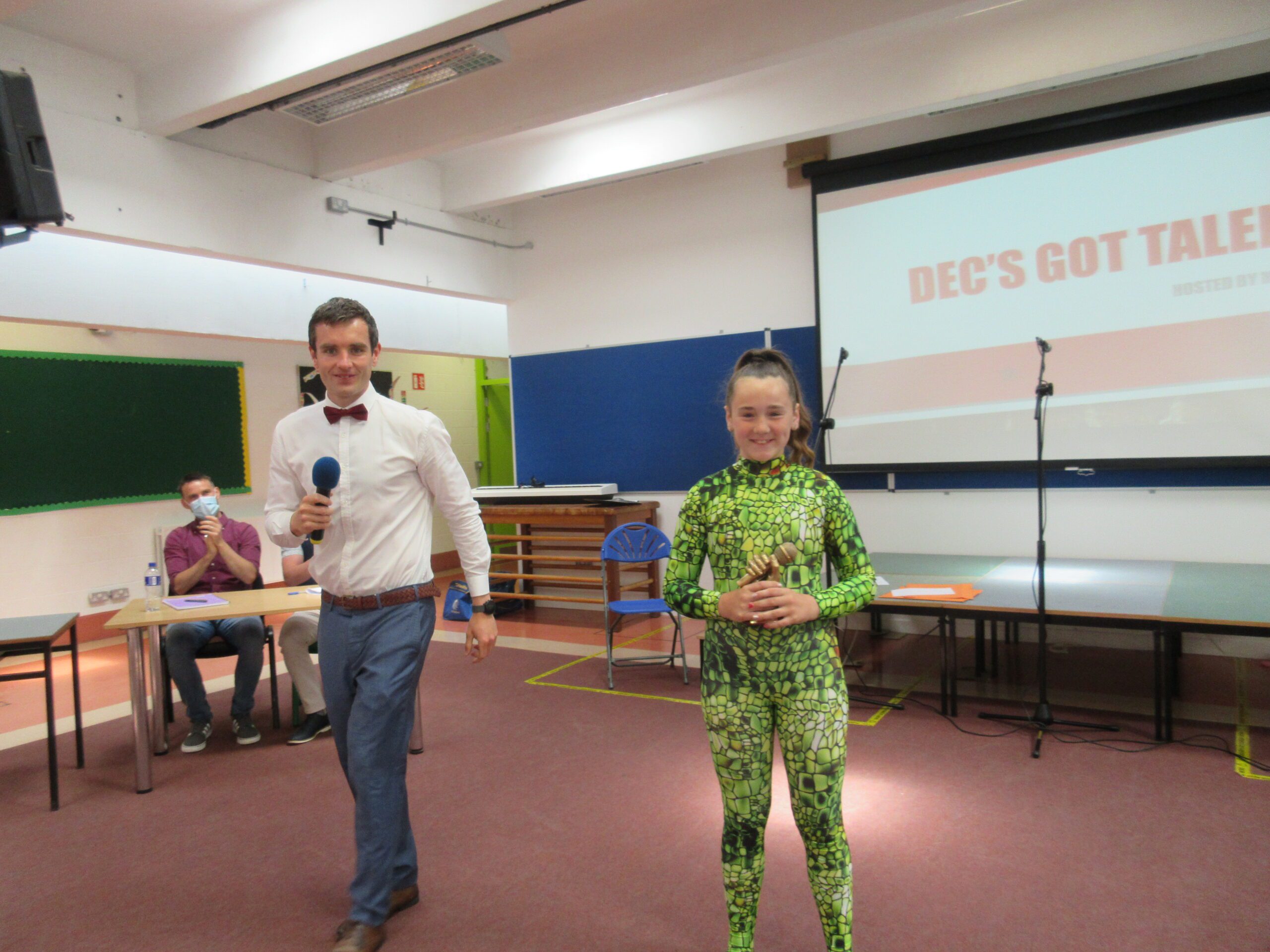